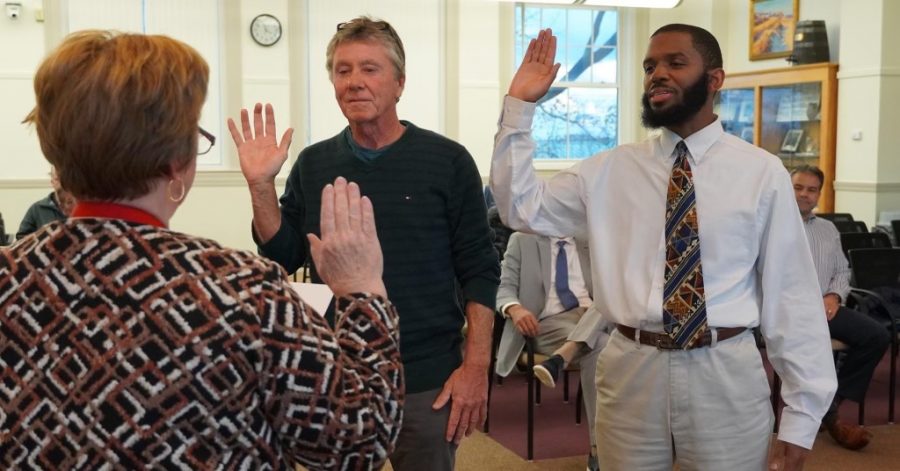 Goode (on the left) and King (on the right) getting sworn into the School Committee.

The two vacant slots on the Barnstable School Committee have been filled by two newcomers: Peter Goode and Andre King. Both are former teachers at Barnstable High School, which now make up the majority on the Committee.

A good way to think of the school committee is as the board of directors, directing Barnstable Public Schools. Their role is then to hire and guide the CEO or Superintendent to run the day to day operations of running the district.

In the election in early November, Goode finished as the far and away winner, with 1,416 votes, while King squeaked by the incumbent Stephanie Ellis by a margin of only 27 votes. Both winners had very different motives and approaches in running.

Goode, who was a teacher in the Barnstable system for over 32 years, said “It seemed like a natural next step to stay involved and run for school committee. But I truly didn’t think I would win to be honest with you. I didn’t do much campaigning, so it was a surprise to me that I won.”

King, a BHS graduate who taught at the high school as recently as last year, wanted the opportunity to help students succeed, “I am confident that our students at Barnstable High School can reach whatever level  of success they are striving for, and now being on the school committee that is going to be a primary emphasis for me.”

The School Committee is currently in the midst of one of its most important and powerful roles: finding and hiring a new superintendent or “CEO.” Whoever is hired will replace Meg Mayo-Brown, who is departing after this year.

Goode, who has been frustrated with the performance of many past superintendents, said “We have had a revolving door of superintendents in and out of Barnstable for 25 years or so, they’re here for two or three years, they fill their contract and they either are not asked back or they move onto the next job.”

Goode contrasted this with many of Barnstable’s loyal staff members saying, “So many staff are here, like me, 20 or 30 years; we stay. We want to do the best for Barnstable. I would say a priority would be looking for some Cape Cod talent, homegrown talent. And I know we have it in Barnstable Public Schools.”

King, a current history teacher at Sandwich High School, has always been amazed by how Barnstable’s history goes back to the 19th century, and wants the new superintendent to recognize this.

“We need a candidate who recognizes what makes Barnstable distinct. We are the largest and most diverse district on Cape and have a history that goes back to the 19th century.  The superintendent coming in, I would like for them to have experience working in a larger district, diverse district with a history going back centuries,” said King.

Another pressing issue facing the Committee is the outflow of students from the district. For Goode, this is a top priority.

King also recognizes the importance of this issue, especially in context of how many students used to attend BHS.

“I can recall conversations with colleagues when we had over 3000 students, we had so many at one time that they had to have two different sessions of instruction. But realize, at that time school choice was not what it is today. What we need to do is make it clear that it’s not that you belong in Barnstable, it’s that you can achieve your highest ambitions at Barnstable,” said King.

He also believes that Goode’s idea for an exit survey is a “good” idea. One of the most popular issues among voters was the candidates’ stance on Critical Race Theory, which has been a hot topic for school committees around the country, and has brought parent involvement to an unprecedented level.

Critical Race Theory is a 40 year old intellectual and social movement and according to Brittanica, “Critical race theorists hold that racism is inherent in the law and legal institutions of the United States insofar as they function to create and maintain social, economic, and political inequalities between whites and nonwhites, especially African Americans.”

This is the issue where the two new members differ the most.

Goode said “I wouldn’t push any right wing theory or left wing theory. This is certainly a far left theory. I’m definitely not a big fan, it’s divisive. If you want to teach it in a doctoral college program, fine. But not at this level.”