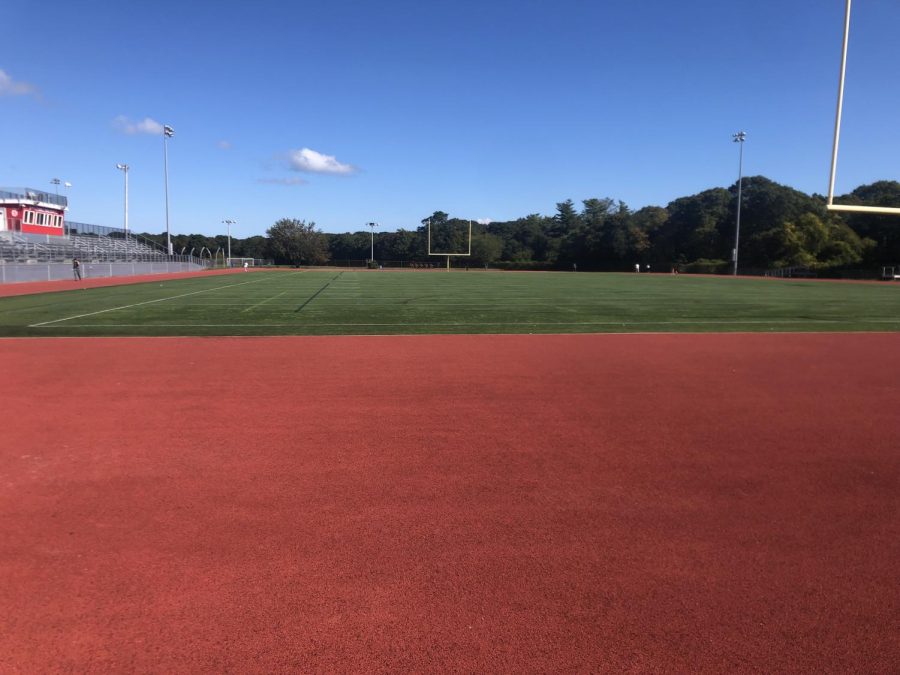 For the past 57 years Barnstable High School football players have run out onto W. Leo Shields Memorial Field on Friday nights, but this year is different. The football team, as well as the soccer and field hockey teams, are playing on the baseball field, which is usually reserved for BHS´s baseball team.

The announcement was made prior to the current fall sports season that the turf that Barnstable has played on since 2010 was not up to standard and would not be able to be played on.

Barnstable Athletic Director Scott Thomas explained “The stadium turf has reached its capacity.” Thomas says this is not uncommon. “Normally this type of field will last 8-10 years.” and that it is simply caused by “normal wear and tear.” Thomas also explains that the same reasons apply for the track. It will be resurfaced and replaced along with the football field.

As a result of this, the baseball field has seen a lot of use this fall. The field was completed prior to the pandemic in 2020 and saw its first action from the soccer and field hockey teams last October. Due to the field being new, it is up to density standards and has the benefit of having a seating area for Barnstable fans.

For some Barnstable athletes the change has worked out great. Junior soccer player Lucie Ells said she enjoys playing on the newer field. Junior football player Will Robke agreed, saying there has been no trouble yet for him on the baseball field.

Robke is thankful that they are still playing on a turf field rather than a grass field. “I like playing on turf because it isn’t affected as much by weather like grass is.”

Ells and Robke don´t play on the turf the same amount, however. The football team practices behind the football stadium on the field that is used for Junior Varsity and Freshman football games. Also, the football team only plays three out of their nine games this season at home. Ells, on the other hand, is much more familiar with the baseball field. She played on it last season and the soccer team practices on it every day.

Both students said they believe that Barnstable has made the most out of an imperfect situation. However, Ells said the inclusion of the football lines, which include numbers at every 10-yard marker have caused some difficulties. Ells explains “Once they added the football lines, it got a bit more confusing just because there are so many.” Robke however, has not had those problems  “The different color lines on the field weren´t a problem for me”

These will be the playing conditions the rest of the Fall season, but with the football field set to be fixed by April 15, 2022 there is hope that for at least part of the spring season, athletes will be able to play.