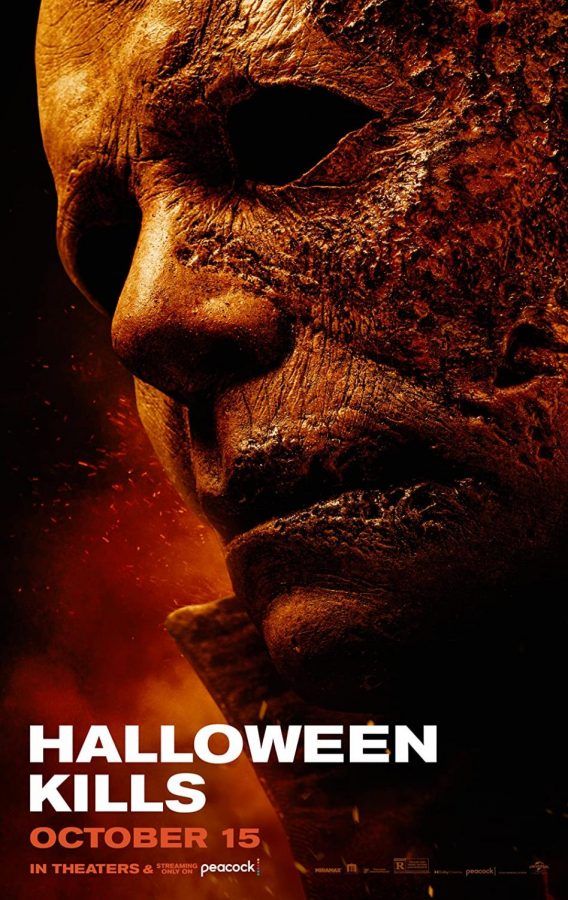 Halloween Kills, the 12th movie in the ‘Halloween’ franchise, came into theaters October 15 and began streaming on HBO Max in addition to other services. The original blockbuster film hit the big screen back in 1978 and grew to be a classic horror movie starring the well-acclaimed actress, Jamie Lee Curtis. As a horror movie addict and a recent fan of the series, I was looking forward to the latest installment of suspense and thrilling cliches.

To offer a brief overview of the movie, Michael Meyers (James Jude Courtney and Nick Castle), a serial killer on the loose yet again, has come to terrorize his childhood town and target some of his previous survivors. Of these survivors, Laurie Strode (Jamie Lee Curtis), along with her family and community, come together to put a stop to Michael’s reign of terror once and for all.

The structuring of the film was as expected. Meyers survived yet another near-death experience, continued to murder anyone who stood in his way, and closed with a nail-biting cliff-hanger. The predictability of this movie caused a significant decrease in the scare factor compared to other films in the series. In addition to this, the role of Michael Meyers was as unrealistic as ever. The reality of his life span degrades at a rapid rate to the point where it’s hard to call this killer a man at all. For example, he was beaten to the ground and shot by multiple townspeople in the same scene. Yet not even 5 minutes later, he had already bounced back.

Part of what makes the films interesting and gives them much more depth, is Laurie’s relationship with the killer. This is because she was the original targeted character in the first movie and has spent her whole life dreading Michael. However, following her very first encounter, she has been determined to stop him ever since. But in this movie, Laurie spent all her time in the hospital (as a result of an injury from the previous movie), unable to come in contact with Michael at all. There was also an overuse of the phrase “Evil Dies Tonight.” This was used as a chant for the townspeople striving to kill Michael on that halloween night. Not only is it a tacky phrase, it was extremely repetitive and practically the basis of the whole movie.

Overall, the suspense was nicely built, the flashbacks were enjoyable, and the halloween scene was well set. I am pleased to see the long overdue finale, Halloween Ends, will be released sometime in 2022. If someone asked me which of the films in this series I would recommend, personally, Halloween Kills would not stand out as one of my favorites. Instead, I would strongly suggest the original, Halloween, which is always a classic, or Hallowen, the last movie that was made in 2018. Both of these offer a fantastic scary movie night with family or friends. Although I wouldn’t suggest watching them alone in case of some traumatizing nightmares.