One of Us is Lying By Karen M. McManus is a Page Turner 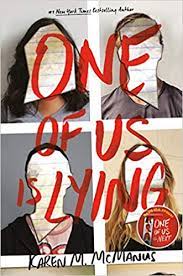 Now that I’ve made my obsession with this book known, I suppose it would be a good idea to describe it to you. One of us is Lying is a murder mystery set in a high school where students lives are practically rooted around drama and gossip because of an app called “Simon Says” that is run by student Simon Kelleher to exploit his peers’ secrets. When a group of five students, including Kelleher, are assigned to detention and the Simon Says curator does not exit the classroom alive, a murder mystery begins to unfold.

The case quickly becomes very high profile, reaching news outlets all over the country promoting the group of teens that were present at Kelleher’s death to form an unsuspecting friendship.

Each chapter of this story is told from the different perspectives of Kelleher’s four classmates, or the “Bayview Four” as they come to be known, as they tell the tales of their lives as murder suspects.

At the risk of spoiling the story, I am not going to disclose any more information but rest assured this novel has a shocking twist that will leave you questioning everything.

Even with this being McManus’ debut novel in 2017, it has already garnered a large audience of supporters and is set to become an eight-episode TV series on Peacock in the near future.

I dare say that One of Us is Next, the sequel to this book, maybe even more dramatic and mysterious than One of Us is Lying, which is no easy feat, so be sure to pick up both novels from the bookstore on your next visit.

My list of favorite books is extremely selective and One of Is Lying has easily pushed itself up around the top of my list. This book is fun, exciting, will leave you on the edge of your seat until the very end and it is a true masterpiece in every sense of the word. I promise you will not be disappointed by this book.