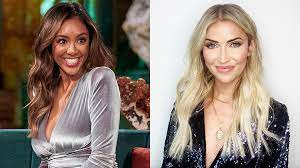 Though there is no current season of “The Bachelor”, “The Bachelorette”, or one of their many spin-offs currently premiering, there has been a lot of news surrounding the franchise.

Chris Harrison, the host of all things “Bachelor” since the franchise started in 2002, stepped down after some racially insensitive comments said in an interview with former “Bachelor” contestant and the star of season 13 of “The Bachelorette”, Rachel Lindsay. Harrison backed season 25 “Bachelor” contestant and winner Rachael Kirkconnell after racist photos of her at a slave plantation party emerged.

Because Harrison stepped down from hosting the franchise, both the stars of season 11 and 16 of “The Bachelorette”, Tayshia Adams and Kaitlyn Bristowe, will be hosting the upcoming 17 season of the show. On March 15, it was announced on “After the Final Rose” that both Katie Thurston and Michelle Young will be the next “Bachelorettes”, with Thurston’s season airing first on Monday, June 7.

Though I do think that Harrison will be missed amongst fans, I am very excited to see two of my favorite “Bachelorettes” back once again to host Thurston’s season. I am also interested to see if the season goes smoother for Thurston, seeing as this will be the first time women have hosted “The Bachelorette”. I wonder if their past experiences of being on the show help Thurston more while on her journey to find love. It will be refreshing to see two independent women leading the season.

Though the hosts of Young’s season, set to air in the fall, have yet to be announced, I am ecstatic to see her giving love another chance. She was one of my favorite contestants on Matt James’ season of “The Bachelor” and I can’t wait to see her get the ending she deserves.

In between Thurston and Young’s season, ABC announced the return of a fan favorite, “Bachelor in Paradise”. The beloved spinoff was not able to air last summer due to the pandemic. Even though no one has been announced as the official host of “Bachelor in Paradise”, I can not wait to see the couples that will sprout between contestants from two seasons of “The Bachelorette” and one season of “The Bachelor”.