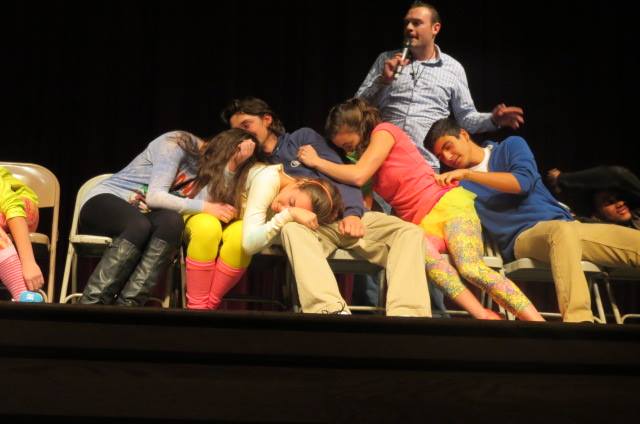 Many Barnstable students get hypnotized by Dan Candell.

Hypnotist Dan Candell  performs for honors and high honor roll students at Barnstable High School each year during a Renaissance celebration. He most recently performed at BHS in November. The students who went were crowded into the Performance Arts Center, where they witnessed Candell’s performance.

Candell has an extensive background in the art of hypnosis. “[At] 12 years old I started [to quickly read] through every hypnosis book that I could get my hands on. I then started using what I learned to hypnotize my friends,” he said. “Rumors started to [circulate] the school that I was hypnotizing teachers to give me good grades. When the principal found this out, he had a meeting with my parents, and when I thought they were going to tell me to never do this again, they sent me to a special class to learn how to hypnotize people professionally.”

After years of performing hypnosis, Candell’s had many interesting experiences. He reached out to one woman with an extreme fear of snakes. “Just the mere mention of a snake would send this woman into hysterics crying, screaming and vomiting in fear. Using a fast method for fears, I had her ‘cured’ in about ten minutes. After her ten-minute session, I brought her to the pet shop down the street from my office, and she was playing with a snake,” said Candell.

A fear that might deter some from being hypnotized is simply the fear of being trapped in a state of hypnosis. “It is impossible to get ‘stuck’ in hypnosis,” said Candell. “If something was to happen to me before I could awaken [the subject], they would stop hearing my voice after about five minutes and would 1) fall asleep or 2) just open their eyes and emerge from the hypnosis.”

The length of time it takes someone to be hypnotized varies due to the different methods that can be exercised. Candell explained that while some can be hypnotized instantly by a process known as a “shock introduction,” other methods hypnotize someone in up to four minutes.