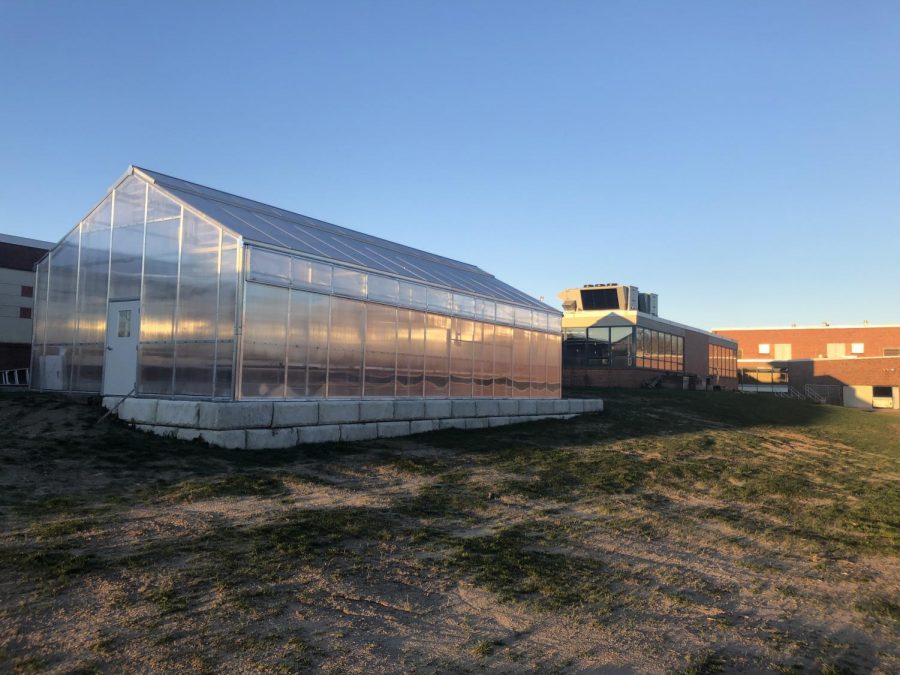 Photos of new Science lab display exterior and interior of the structure. Courses in Environmental science will be held here in the near future.

After months of construction in the 1500s, October 26th, 2020 was an important day for the environmental science career pathway as the newly slated science lab was completed and hosted its first day of classes. The project, led by environmental science teacher Mike Smith, had been in development for over two and a half years with multiple staff members, including the science curriculum coordinator and director of facilities being instrumental in the implementation of the project.
Although the COVID-19 pandemic did not prevent construction from happening, it caused a 3-month delay due to supply chain issues occurring within the United States at the time.
“There was the HVAC system which was held up because of a supply chain issue. The original completion date was mid-July, but was finished in early October,” said Smith.

The lab itself features a new aquaponics system, which is supported by aquaculture and a student-built hydroponics system. Smith, who now teaches in the laboratory, explained how these systems functioned.
“Aquaculture is breeding/raising fish, shellfish, and aquatic plants. In our system we will raise Tilapia. Hydroponics is the cultivation of plants using water and nutrients instead of soil.  The waste produced by the Talapia will increase the ammonia in the water. The nutrient rich aquaculture water is fed to hydroponic grown plants,” said Smith.
In order to support the amount of organisms, water, and nutrients circulating in the laboratory, there are eight 280-pound multi-use tanks in the laboratory used for aquaculture. Within those containers are fish, oysters, clams, and algae that are cultivated for the main hydroponics systems.
“The lab is primarily being used by the environmental science and technology classes, which is a vocational program meant to help students gain a leg up in a competitive college major and act as a career path. They also have the option to walk directly into the workforce after high school, but that’s their choice,” said Smith.

Outside of the laboratory, a new course being introduced to the career pathway next year is an internship/independent study with one of the companies they collaborate with. Examples include the Centers for Coastal Studies, Barnstable Clean Water Coalition, and The Silent Spring Institute. Students determine their topic of interest and create a detailed timeline of their study; at the end of the year they present their findings to BHS staff, science department, and potentially school committee. Unfortunately, because of the COVID-19 pandemic no physical internships have occurred this year.

Senior Andrew McKeen is one such student who organized an independent study. Along with taking Environmental Science & Technology II, he works in the lab to study climate change and weather patterns in Hyannis. This research would help determine the consequences of climate change on Cape Cod. Additionally, he was one of the students last year who helped construct the aforementioned hydroponics system.
“The lab is so beneficial for students who want to immerse themselves in environmental science and potentially find a career,” said McKeen.

A handful of potential consequences Cape Cod would confront with climate change is rising sea levels and higher average temperatures. McKeen found an 80-year data set of Hyannis weather and climate while studying in the lab, and provided his perspective of Cape Cod’s climate patterns.

“Sea level rise will have a large impact on our communities. The highest elevation on Cape Cod is 100 feet while most areas are below 30. The current prediction for sea level rise is 3-6 feet in the next 80 years, but the problem is that it is not slowing down and has a high chance of increasing unless we do something drastic. Give it a couple hundred years and Cape Cod is going to be a lot smaller,” said McKeen.

The laboratory is only slated for the environmental science career pathway at the time of writing. Smith did not deny the possibility of the lab expanding in the future, but because the lab has only been recently completed, the lab is restricted to those classes.