Adapting to High School Sports in a Pandemic 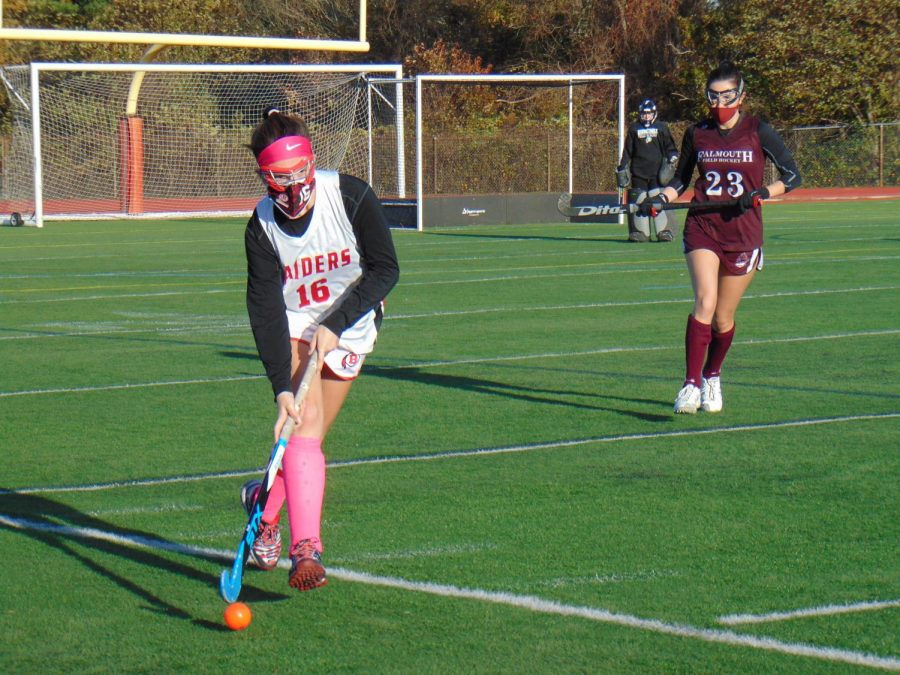 This fall season, Barnstable High School sports teams are maneuvering their way through the new normal COVID-19 style of play. Barnstable Athletics have taken a turn due to COVID-19 regulations, and teams have reported that it has been difficult for both the athletes and coaches.

Boys soccer captain senior Chris Carter said there are various changes to the game of soccer due to the virus. For soccer, every athlete must wear a mask at all times. There is also a no-contact regulation as well as no throw-ins, therefore kick-ins are only allowed.

Carter finds himself and his team drowning in yellow cards due to the no contact rule. “We have nine yellow cards so far for this season,” said Carter.

He said the hardest part of adapting to these changes is no physical touch; it is extremely challenging and his team gets very frustrated with the refs while playing.

For a typical Barnstable High School soccer season, there are usually 16 games. Although, this season they only have eight games with a tournament at the end of the season limited to only Cape Cod teams.

Furthermore, there aren’t halves; the game is split up into four quarters of 20 minutes. “This is very challenging because quarters slow down the pace of the game; everything is so much slower,” said Carter.

The virus has impacted so many people in various ways, and now the pandemic is affecting social life on rides to sports games. Student-athletes live for the thrill and excitement on the way to away games, and now transportation is not the same. Each seat on the bus is limited to one player, and there is no carpooling allowed. This is challenging for children without their license or rides to and from school.

Girls senior soccer player Sophia Weinstock said the rules on the bus have changed their team dynamic because bus rides used to be a place where the whole team would bond, but they don’t have that ability anymore because they are all spread apart on the bus.

“Our connection is now forced when we first come onto the field and that aspect has always been a vital part of how we play in the game,” said Weinstock.

Cross country coach and English teacher Keith Caldwell said he is disappointed with the schedule of the fall season this year. “We are limited to four practices a week, and we aren’t allowed to practice on the weekends, so that puts the team at a disadvantage,” Caldwell said.

“It’s hard not being able to do team building this year on weekends because we would usually go run at a beach or cranberry bog so the students had more opportunities for team bonding,” Caldwell said.

Caldwell said he trusts the athletes will workout on the off days.

Runners must wear masks and be socially distant at all times except while racing. “They have to wear a mask at the start and finish line, during warm-ups and in the buses,” said Caldwell.

“They modify the courses so if your course in the past was really narrow you can’t do that course this year,” said Caldwell.

He thinks the team has adapted well to the new regulations, and fortunately golf and cross country were the least affected by the pandemic.

“I’m so grateful to even have a season, even though our season is shortened, we did accomplish a goal that we were able to compete in a sport and we did a great job staying safe and healthy,” said Caldwell.

“We can only do seven versus seven [players], which is challenging because we are used to eleven versus eleven. Everyone becomes exhausted quickly, especially since we have to wear masks at all times,” said Pierce.

“Masks are hard to deal with,” said Pierce. If athletes want a mask break they must be 10 yards away from other people. Pierce said she puts her water bottle far away from her teammates and coaches so she can get a quick sip before rushing onto the field.

For field hockey, instead of halves, the game is split into periods that are 15 minutes long. Furthermore, like soccer, there is a no-contact regulation for field hockey.

Pierce said each player is allowed two spectators per game, and that they should be the same people every game so there is less exposure of different people.