At the 2015 Associated Press Sports Editors’ annual commissioners meeting, NHL Commissioner Gary Bettman stated that using a woman’s name to insult a player’s performance is acceptable.
Little girls are told they have a hard shot… for a girl.
USA Women’s Ice Hockey Team won gold in the 2018 Olympics, yet commentators were focused on their smudged mascara.
In a sport dominated by men, these startling statements come with little surprise. With even less surprise comes the fact that checking is banned in women’s ice hockey.
After the inaugural 1990 Women’s World Championship, the International Ice Hockey Federation decided to ban checking to encourage participation because they thought physical contact would scare away women. But times have changed and so have gender roles. Now it’s time for hockey to change and adapt.
In an online article published by USA Hockey Magazine, it states checking to be “one of the most demanding skills in hockey” and “one of the most important when it comes to defensive team play.” If this physical contact is so pivotal to the game then why is it not allowed in women’s hockey?
Many answers have been suggested, yet they all have boiled down to the same message: women are too delicate. Even when you disregard the sexism, the reasoning is weak. Ice hockey is not safer for women, or for anyone, if checking is penalized. The NCAA reveals that the highest rate of concussions is reported by female ice hockey players, not by their male counterparts, or even by male football players who have a notorious association with concussions.
Hockey has always been prevalent and prominent in my family. I have been playing hockey since I was in fourth grade. I started with boys. When I finally reached the age level that allows checking in hockey I had switched to girls hockey, and to playing goalie. I still had first-hand experience with and without checking by picking up games with the boys. Now I am the starting goalie for the BHS Girl’s Ice Hockey Team and it has become clear to me that checking can change the speed and dynamic of a game, and since any aggressiveness is often penalized, there are more penalty kills and power plays in girls hockey.
Since checking is banned in women’s ice hockey, we never learn how to correctly hit, or more importantly, how to take a hit properly. In other words, our checking goes unchecked. Pair this with the fact that bodychecking is the most penalized action in women’s hockey and it becomes clear why concussions are so common for women in the sport. Considering we are already checking, why not make it legal? At least then women would be given the opportunity to learn how to protect themselves.
This outdated rule in women’s ice hockey has determined wins and losses of many games because of the gray area of physical contact. My team rarely knows what kind of game we can play until we step on the ice and see what calls a referee makes — or doesn’t make. This lack of consistency in officiating games creates frustration that is extremely common throughout women’s ice hockey. While one might see a call as reasonable, others might see it as ridiculous, and both views tend to be valid due to permitted physical contact not being adequately defined.
Once men stop trying to hide behind the excuse of “protecting fragile women” and realize that all they are trying to protect is their at-risk masculinity, then we will be included in the sport as equals, including equal physical contact. So, to the men in charge: please check your privilege, because women ice hockey players want to check. 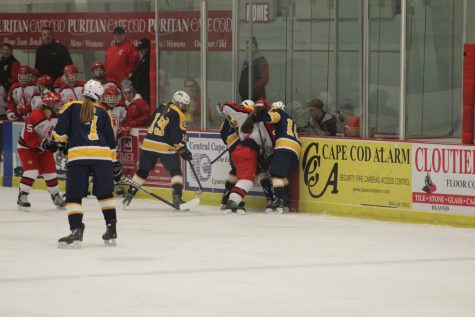